Mammals are separated into two distinct evolutionary lines: the marsupials (metatherians) and the placentals (eutherians). The two lines separated more than 100 million years ago and as a result of the long separation, a marsupial is structurally quite different from the rest of the world’s mammals.

Marsupial mammals are named after the abdominal pouch in which the young live while they are suckling called a ‘marsupium’, although a number species do not actually develop a pouch. Their distribution is limited to Australia, southern parts of Asia, and Central and South America. Two very different sets of animals are found in the two distinct regions of Australasia and the Americas. 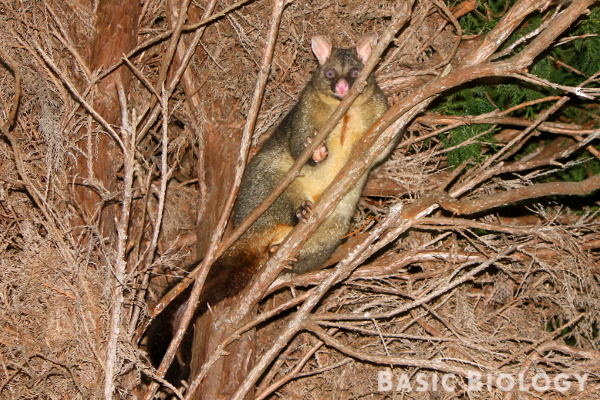 Marsupials, in general, have relatively short gestation periods and young are born very small and poorly developed. The tiny infants make their way to the marsupium and attach themselves to a nipple where they continue their development.

There are 87 species of opossums found in the Americas from 17 different genera. They can be found across almost the entire length of North and South America, stopping only at southern Canada. Not all opossums have a marsupium. In some species the marsupium is present and in others it is simply reduced to folds of skin that cover the nipples.

Opossums generally have long tails that are often capable of holding or grasping objects such as tree branches. Most species live primarily within trees on a diet of leaves and insects. Some species also feed on birds and their eggs. The lutrine opossum from the genus Lutreolina lives a semi-aquatic life and has a carnivorous diet feeding primarily on insects.

Within Australia, possums are familiar animals in many settings as they are very opportunisitc and find ways to take advantage from many human activities. There are several species from five families of marsupials that all go by the general name of ‘possum’; the best known possums include the brush-tail possum and the ring-tail possums.

Most possum species live primarily in trees and often have long tails that are capable of gripping tree branches and holding the animal’s weight. The brush-tail possum is a nocturnal marsupial that feeds primarily on plant material but also eats insects, small birds and eggs. It has a long dark black tail and grows to around 6 kg. The brush-tail possum produces a musky scent which is used to mark an individual’s territory.

Kangaroos and wallabies belong to the family Macropodidae which also includes euros. The smallest wallaby, the rock wallaby (Petrogale burbidgei), weighs up to 1.5 kg; the largest kangaroo in comparison, the great gray kangaroo (Macropus gigantus) can grow over 2 m tall and weigh as much as 95 kg. Both animals are specialized jumpers and kangaroos are the only large mammals that move by hopping on two legs.

Ecologically, kangaroos fill a similar niche to the jumping ungulates in other continents such as antelopes and spring boks in Africa. The travelling feats of large kangaroos are impressive with figures such as a top speed of 70 km/h, a distance of 13.5 m in a single jump and jump heights of over 3 m.

Found only in eastern Australia, the koala is the only member of the family Phascolarctidae. Koalas are rather large marsupials and weigh up to 12 kg. A koala has distinctive tuft ears and a large black nose which makes it one of the most easily recognizable of Australian’s marsupials. Due to the fact that koalas feed only on the toxic and energy poor leaves of Eucalyptus trees, they are very inactive and move slowly which helps to reduce their energy expenditure.

Koalas live solitary lives and have home ranges that can sometimes overlap. Relative to other marsupials, the koala require a long time to reach maturity. After living within its mother’s pouch for 6 months, a young koala will spend another few months riding on its mother’s back. After leaving the comfort of its mother’s back, a koala won’t reach maturity until it is 3-4 years old.

The three species of wombats come from a single family known as Vombatidae. Many of their structural features, such as their skull, teeth and faces, are very similar to those of rodents. They have short and powerful limbs and an almost absent tail. All three species are completely herbivorous. They are great burrowers and are able to form tremendous networks of tunnels. Young wombats will leave their mothers burrows at around 4 months once they no longer require her milk.

The Tasmanian devil was once distributed across most of Australia but is now limited to just the small island of Tasmania, off the south coast of mainland Australia. They are primarily scavengers but will also kill small animals and are known for their incredibly strong jaws, which can crush the skull of any Australian animal.

A Tasmanian devil can weigh up to 10 kg and can eat more than 40% of their entire body weight over the course of a single night. They tend to be solitary animals but are sometime found feeding in groups on one carcass. The Tasmanian devils is listed as endangered on the IUCN Red List after a contagious facial cancer has recently wiped out much of the remaining population. 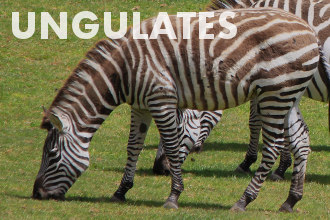 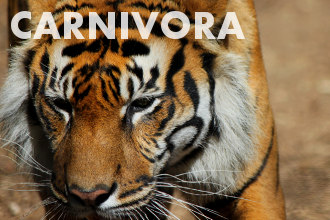