What you’ll learn on this page

A lake is an area of land that is filled with water. Aside from the streams and rivers that flow in and out, a lake is completely surrounded by land and can be formed in basins or depressions.

No lake is permanent and they actually begin filling up with sediment as soon as they are created. Deep lakes however can exist for millions of years.

Lakes can be either fresh or salt water and are inhabited by many fish, invertebrates, amphibians, plants and microorganisms. They are the largest source of available freshwater in the world and store around 180,000 km3 of water.

Where are lakes found?

You can find lakes on any of the world’s continents. Even the frozen continent of Antarctica still has around 400 lakes in its warmer areas.

Lakes are mostly found in mountainous areas although they can be found in almost any environment on land given the right conditions. They are found inland away from the coast and are not attached to oceanic water in any way.

A large number of the Earth’s current lakes were formed after the last ice age. As glaciers advanced and retreated over winter and summer they scour out the ground underneath them. As the ice age ended, the melting snow and ice collected in the depressions formed by the glaciers.

Why are lakes important?

All life on land depends of freshwater to survive. Lakes contain the vast majority of the Earth’s accessible freshwater. In total they store around 180,000 km³ of water. A measly amount compared to the Earth’s total of 1.4 billion km³ of water but enough to support the huge diversity of life on land and in lakes.

Lakes provide a habitat for a vast array of animals, plants and microorganisms. The most significant difference between living in a lake and living in a river is that the organisms that live in lakes do not have to deal with running water. Thousands of species of fish and invertebrates have evolved for life in the still water of lakes. 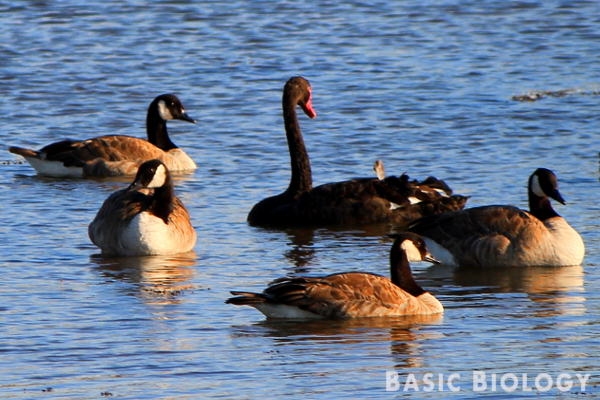 A large number of bird species, commonly referred to as waterfowl, are dependent on the invertebrates and fish within lakes and the surrounding wetlands. Many species of amphibians are also found only in and around the edge of lakes.

Lakes are also important for cultural and recreational purposes. Millions of people each year enjoy lakes for activities such as swimming, fishing, sailing and water skiing. Fishing in lakes is a multi-million dollar industry in many countries around the world and many lakes hold cultural and spiritual significance for their local people.

How big are lakes?

Lakes can vary hugely in size and at same point on the small end of the scale they become ponds. The largest lakes frequently cover areas well over 10,000 km2 or 4000 mi2  while smaller lakes can be less than 1 km2.

The largest lake in the world is Lake Baikal in Russia and it covers an area of 31,722 km2, an area similar to the size of the Netherlands or Maryland state in the USA. At its deepest point the water reaches 1637 m deep and has an average depth of 749 m.

The Caspian Sea is sometimes also considered a lake, in which case it is by far the largest lake and contains over 72,000 cubic kilometres of water. That is more than three times the amount of water in Lake Baikal.

How do lakes form?

Lakes form in a huge variety of ways. Usually they are formed by different geological events such as volcanic eruptions, tectonic uplift and landslides but they can also be created by other forces, for example by humans, beavers or changes in a river's path.

Here is an explanation of some of the different ways in which lakes can form:

The formation of a mountain range also creates depressions in the land. As alpine snow melts and water drains off the mountains it is caught and stored in depressions creating lakes. Lakes created by tectonic uplift are generally the longest living lakes because they can be extremely deep, Lake Baikal for example is over 1600 m deep.

When volcanoes erupt not only do they form mountainous volcanoes but they also create basins. Pour drainage from basins means that water often accumulates to form a lake. 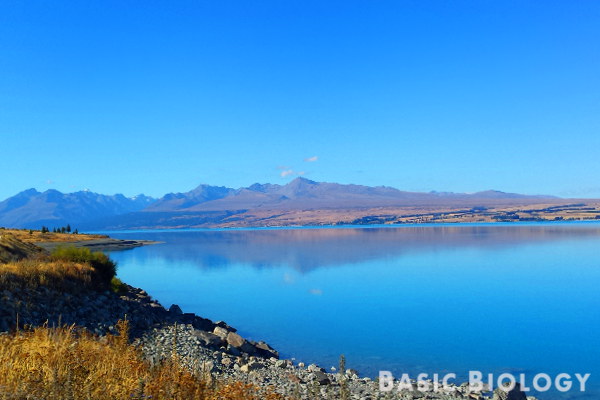 As explained earlier, the movement of glacial ice has the ability to grind out the ground beneath the glacier. As a glacier advances and retreats the ground beneath it is repeatedly worn away. Sediments are deposited at the end of the glacier's range and can form a barrier that prevents water from draining out.

Newly formed land can sometimes form barriers along a rivers path and cause the formation of a lake. Barriers can be the result of one-off events such as landslides or volcanic eruption or the gradual accumulation of land in the form of sand bars and sediment deposits.

The availability of dissolved oxygen in the water of a lake is vital for supporting lake ecosystems. Aquatic plants make oxygen available for animals and microbes through photosynthesis. Bacteria can deplete oxygen supplies which can lead to the death of fish, invertebrates and other organisms that depend on oxygen to survive.

Nutrient rich waters are at increased risk of becoming oxygen deprived. High levels of nutrients can support large algal blooms but as the algae dies, they are decomposed by bacteria which can use up all the available dissolved oxygen. The result can lead to mass death and a complete desolation of the ecosystem.