A river (or stream) is characterized as a freshwater ecosystem with running water. They can range from very small streams fed by a small volume of water from a natural spring or mountain run-off to very large rivers such as the Mississippi, Nile and Amazon rivers. Although we often consider rivers and streams to be major features of the landscape, they actually only make up around 0.1% of the land but are made more significant to humans by the fact that many human cities and civilizations are built around the freshwater supplied by rivers and streams.

Importance of rivers and streams 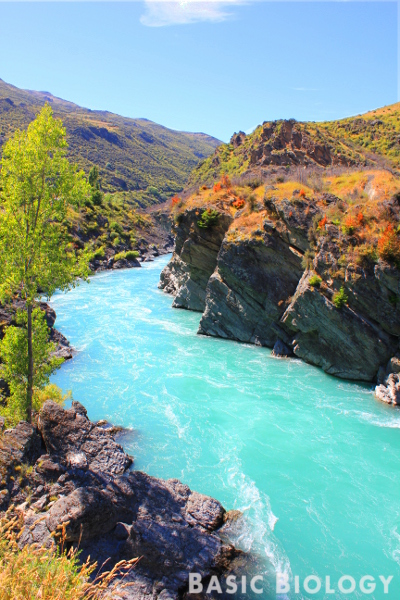 The most obvious quality of streams and rivers that humans and animals benefit from is their supply of fresh drinking water. Through history and still to the present day, almost all of the world’s cities will be found either on the coast or on the banks of a river.

A second hugely important feature of streams and rivers is the fact that they carry huge amounts of water across land. As much as 37000 km³ of water is carried across land and holds enough energy to supply more than 100x the total human production.

They are also important as transport pathways for many ships carrying cargo inland. The canals leading up to the Great Lakes of northern America for example allow boats to travel into the center of the North American continent to deliver goods and similar examples can be seen in all continents. On top of their importance for drinking water, energy and transport, they are also popular places for recreational activities such as rowing and water skiing.

The flow of water in a stream is one the most significant factors affecting a stream ecosystem and has a strong influence on most properties of a stream such as the substrate and animal species that will be found there. The flow of a stream is controlled by three inputs; the surface water, subsurface water and ground water. The surface and subsurface water are hugely variable between periods of rainfall; groundwater, on the other hand, has a relatively constant input and is more controlled by long-term patterns of precipitation.

Rivers and streams are influenced hugely by the hydrological cycle as rain provides the main source of water for most streams. In the US, around 30% of the rainfall makes its way into streams and rivers while the rest either evaporates, is absorbed by plants or runs into the ground water. There is a lag between the time of rainfall and the when the water reaches a river. This lag can make streams unpredictably dangerous following heavy rain periods because people aren’t expecting the delayed increase in water flow.

One of the most important features of a river is their magnificent power of erosion. They have the ability to carve out the landscape and disperse sediments and nutrients thousands of kilometers downstream. The Grand Canyon is a prime example of the power of streams and rivers to reconstruct the landscape through the gradual and constant mechanism of erosion.

There are three forms of erosion: corrosion, abrasion and cavitation. These three methods combine to influence a rivers shape and topography. Erosion influences the morphology (shape) by creating or destroying new paths for a stream to meander through. A river’s topography (i.e. the layout of the river bed) is determined by the power of erosion as the softer, weaker fragments of the stream bed are eroded away, leaving the harder, stronger substrate to form the stream’s topography.

The content collected through erosion and transported with the flow of water downstream will eventually be deposited as the energy within the flow of the water reduces. This generally occurs in lowland areas often with large flood plains and can frequently lead to braided streams.

The animals found in the eroding and depositing sections of a stream use different methods to collect their very different food sources. High energy parts of a stream have high numbers of invertebrate species which obtain their food by setting up nets to collect the food as it floats with the current downstream. At the other end of the scale, in low energy stream environments, it is more common for animal species to linger in depositing pools within the streams and collect their food from the deposited materials. 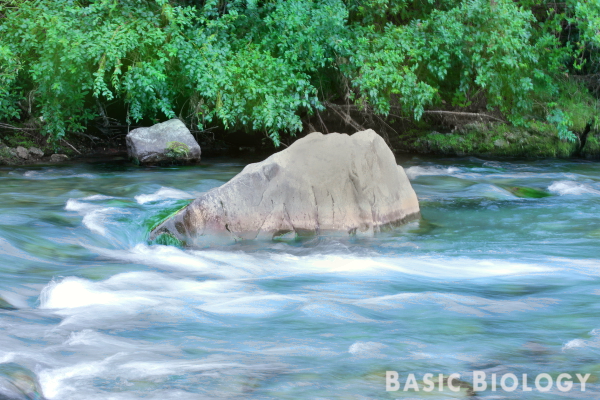 Vegetation, i.e. trees and other plants, along the banks of a stream plays a big role in stream ecosystems. A good layer of vegetation along a stream, known as the riparian strip, is able to filter water from the soil and reduce the influx of water and nutrients to the stream.

In small streams which are surrounded by plants and trees, the majority of food for animals within the stream comes from dying plant material, such as leaves, fruit and branches, that falls into the stream.The vegetation therefore helps to moderate the quantity and quality of water moving into a stream and is an important source of food for freshwater animals.

The invertebrates and fish found in a stream change as we travel from the headwaters to the lowlands. The environment at the headwaters forces animals to adapt to high energy environments with large food particles but water of good quality. Further downstream, animals don’t have to withstand such intense currents and feed on smaller suspended food particles but must deal with poor water quality due to the increase in nutrients from the surrounding land.

It is typical for many aquatic insects to follow a similar life cycle of one generation per year with the egg and larva developing and growing during the winter and maturing and mating during the summer. By using this strategy, juvenile insects have lower metabolic costs in the cold water during winter and can therefore put more energy into growth. They then make the most of the warmer temperatures during summer when their metabolisms are naturally faster and spend their time flying around above water mating and reproducing. 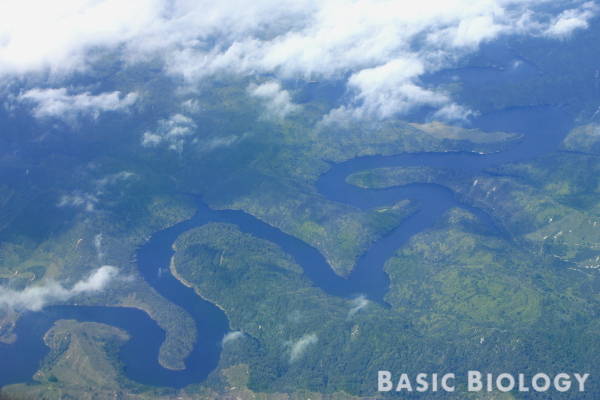 A stream’s chemistry has an unavoidable influence on the life within the stream. Variations in suspended and dissolved materials in the water affect the balance of life in any stream. The chemistry can vary both in space and time with seasonal fluctuations in nutrient additions through run-off, leaf litter and other debris. The chemical composition within a stream is made up of both inorganic and organic materials that can be either dissolved or floating in the water.

Inorganic substances include metals and non-metal ions such as aluminium (Al), sodium (Na), calcium (Ca), phosphorus or phosphate (PO4) and nitrogen or nitrate (NO3). Organic material is anything that has a living origin so things like leaves, branches, fecal material and even oil. Suspended material is all the floating content in the water that is not dissolved and can often make the water in a stream or river seems murky or dirty.

Other important processes and factors

Other processes can have a significant effect on the quality of water and therefore the animal and plant life within a stream. Processes such as are evaporation, run-off, pollution and volcanic activity all influence streams by changing the properties of the water within the stream.

Run-off, pollution and volcanic activity can provide a stream with additional nutrients which can in turn lead to a reduction in dissolved oxygen within the water and cause the death of animal life within the ecosystem. Large amounts of evaporation within a stream are able to increase the concentrations of nutrients and minerals within the water and again reduce the quality of the water.

More factors that influence the animal life within a stream include temperature and moisture. Some smaller streams may be temporary and only flow during the rainy season. In streams such as these, the animal life has to be able to adapt and survive in dry conditions or migrate to a different stream. A number of the species found in these regions are either amphibious or have strategies to deal with the dry conditions such as drought tolerant eggs.