What you’ll learn on this page

Carbohydrates are one of the four main categories of molecules found in living things - the other three being proteins, lipids and nucleic acids. They are vital for life on Earth and perform a range of functions such as providing energy, structural support and cellular communication.

A carbohydrate is either a sugar or a polymer of sugars. A polymer is two or more simple sugars joined together. Carbohydrates are carbon based molecules with hydrogen and oxygen bonded to a chain of carbon atoms.

A simple sugar is known as a monosaccharide. Monosaccharides can bond together to form disaccharides and polysaccharides. These are the three different types of carbohydrates and all three are important for different purposes in the natural world.

Why are carbohydrates important?

All life on Earth requires carbohydrates. They have found their way into the lives of not only animals and plants but also fungi, bacteria, archaea and protists. 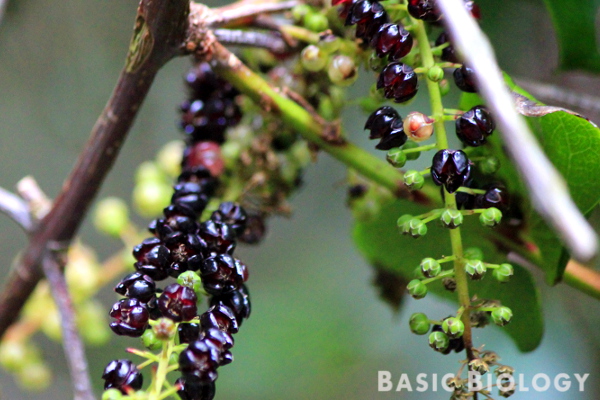 Plants use the sun’s energy and CO₂ to create carbohydrates. These carbohydrates form the foundations of almost all ecosystems on Earth.

Using carbohydrates for energy prevents proteins being used for energy. This is important because it allows proteins to be used for other purposes such as metabolism and muscle contraction.

The oxygen atoms of a carbohydrate can be bonded to carbon with double or single bonds. If an oxygen forms a double bond to a carbon atom (C=O) along the carbon chain, this is known as the carbonyl group.

Hydrogen atoms take up most of the remaining carbon bonds. Generally there is around twice as many hydrogen atoms in a carbohydrate as there are oxygen atoms.

In reality, carbohydrates don’t always form linear chains but are often arranged into rings. This occurs because the double bond between the carbon and oxygen of the carbonyl group is reduced to a single bond and the oxygen instead bonds to another carbon atom along the chain. This creates a ring containing multiple carbon atoms and a single oxygen atom.

Monosaccharides are the most basic carbohydrates and are commonly known as simple sugars. They include well-known sugars such as glucose and fructose. A monosaccharide includes all the necessary components of a carbohydrate i.e. the carbon chain, carbonyl group and hydroxyl group.

Monosaccharides are the building blocks for larger carbohydrates and are also used in cells to produce proteins and lipids. Sugars that aren’t used for their energy are often stored as lipids or more complex carbohydrates.

It is the monosaccharides that are mostly used by cells to get energy. Glucose is arguably the most important monosaccharide because it is used in respiration to provide energy for cells. The energy stored in the bonds of a glucose molecule is converted by a series of reactions into energy that is usable by cells.

A disaccharide is a carbohydrate made from two monosaccharides joined together. They are still considered sugars but are no longer simple sugars.

The best known disaccharide is sucrose, which we use in our homes as sugar because of its sweetness. Sucrose is made by bonding together one fructose and one glucose molecule.

It is not uncommon for humans to have difficulties breaking down lactose into glucose and galactose after eating dairy products. This is the cause of the health condition known as lactose intolerance which can cause diarrhea, bloating, gas and throwing up.

The names of monosaccharide and disaccharide carbohydrates finish with the suffix -ose. For example fructose, glucose, galactose, sucrose and lactose.

Animals and fungi also use polysaccharides as structural materials. Chitin is a polysaccharide found in the exoskeletons of insects, spiders and crustaceans as well as in the cell walls of fungi.