Photosynthesis is arguably the most important set of chemical reactions on Earth. It is a process that occurs in plants and some microorganisms and results in the production of sugars. Plants produce their own food through the process of photosynthesis.

The products of photosynthesis are a source of energy for plants, animals, and almost all other living things. Photosynthesis also leads to an increase in the concentration of oxygen in the atmosphere. Without photosynthesis, animals would never have evolved because the oxygen we need to breathe and survive would not be present in the air or oceans.

Photosynthesis is a set of chemical reactions that uses energy from the sun and carbon dioxide to produce sugar and oxygen. The sugar provides plants with energy to grow, and the plant material provides food for grazing animals.

When plants die their leaves, stems and roots are food sources for decomposers such as fungi and bacteria. Photosynthesis, therefore, supports entire ecosystems by providing energy which cascades down from plants and algae to animals, fungi and other microorganisms.

Photosynthesis is a complex series of reactions. At the simplest look, photosynthesis consists of carbon dioxide (CO₂) and water (H₂O) being converted into glucose (C₆H₁₂O₆) and oxygen (O₂) with help from the sun’s energy. The overall general equation looks like this:

More correctly balanced and in the chemical formula, the equation looks like this:

In reality, photosynthesis is far more complicated than this simple reaction. It is a complex series of reactions that are not yet completely understood. These reactions occur within special organelles of a plant cell called ‘chloroplasts’. 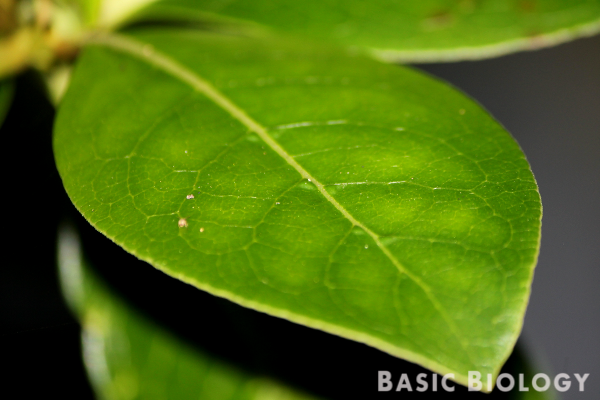 A chloroplast is a small cellular structure found inside of plant cells and the cells of other photosynthesizing organisms. It is inside chloroplasts where photosynthesis occurs.

A chloroplast contains stacks of disk-like structures called ‘thylakoids’ which are surrounded by a fluid called ‘stroma’. Different parts of the photosynthesis process occur in the thylakoids and stroma of chloroplasts.

Splitting a water molecule releases an electron with the energy to start turning CO₂ into glucose. Splitting the molecule of water also releases oxygen which is how photosynthesis produces oxygen.

Chlorophyll a is one of the few molecules that has the ability to use light energy in this way. Other molecules, such as chlorophyll b and carotenoids, can perform the same function but are not as efficient as chlorophyll a.

A chlorophyll a molecule has a specific shape that allows the molecule to absorb a range of different light waves. It does not, however, absorb green light waves but instead reflects the green light. This makes chlorophyll a appear green and is the reason why plants are mostly green.

The light reactions are a set of reactions that convert solar energy into cellular energy. They are performed in the thylakoids of chloroplasts and are driven by chlorophyll a.

The general purpose of the light reactions is to use the sun’s energy to produce molecules called ‘ATP’ and ‘NADPH’. These two molecules can then be used to fix CO₂ into sugar in the Calvin cycle. 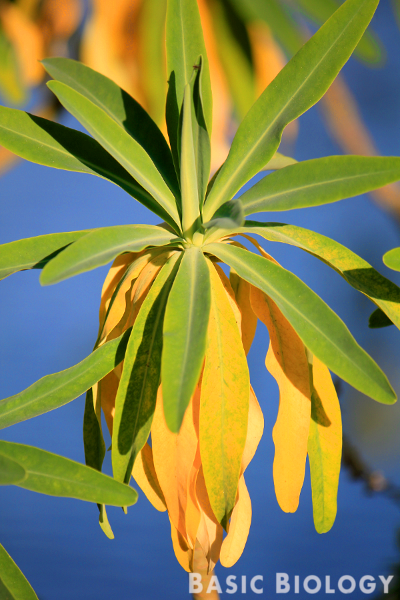 The pumping of H⁺ results in a buildup of H⁺ in the thylakoid. Naturally, H⁺ wants to have a balanced concentration on both the inside and the outside of the thylakoid.

The H⁺ is able to move back out to the stroma via an enzyme called ‘ATP synthase’. As the H⁺ moves through ATP synthase it drives the enzyme to produce a molecule called ATP from ADP. ATP is then available to be used in the Calvin cycle.

The electron then moves along the electron transport chain of photosystem I and its energy is used to reduce NADP⁺ to NADPH. The NADPH molecule is used along with ATP to fix CO₂ into sugar in the Calvin cycle.

The production of ATP and NADPH is a successful conversion of solar energy into cellular energy. These molecules, however, have a short lifespan and are typically used very quickly after being formed. The remaining steps in the photosynthesis process serve the purpose of converting the short-lived cellular energy into long-lived chemical energy in the form of sugar.

The reduction phase of the Calvin cycle reduces PGA to a second three carbon molecule called ‘G3P’ (glyceralderhyde-3-phosphate). Molecules produced in the light reactions, ATP and NADPH, provide the energy for this reaction to occur.

The remaining one molecule of G3P is free to exit the Calvin cycle. It takes the fixation of six CO₂ molecules to create two spare molecules of G3P. These two molecules of G3P are free to be used to make glucose, fatty acids or an alcohol known as ‘glycerol’.

Overall, the reactions of the Calvin cycle takes CO₂ from the atmosphere and creates a three carbon molecule called G3P . G3P is used to regenerate RuBP and produce sugars, fatty acids or alcohol. Cellular energy in the form of ATP and NADPH provide the energy to make these reactions occur.

In the ocean and freshwater environments, microscopic organisms called ‘phytoplankton’ are the main primary producers. Phytoplankton are at the bottom of the food chain in these aquatic ecosystems.

In theory, it would be possible for plants to use the sun’s energy to directly produce cellular energy. Instead, plants produce sugars which then need to be broken down via respiration before a plant cell can access the energy that has been absorbed.

The benefit to this roundabout way of utilizing the sun’s energy is that sugars can be stored for later use. Cellular energy has a very short lifespan and is typically used very shortly after becoming available. Using photosynthesis, plants are able to build up stores of energy when the sun is present to be used when the sun is absent i.e. nighttime or winter.

In good conditions, plants produce more sugars than they need to survive and are able to grow. The growth of plant tissue supports the life of animals, bacteria, fungi and protists.

These organisms will either directly or indirectly be supported by the energy supplies of photosynthesizing organisms. Many animals, known as grazers, feed on plant material. Bacteria live in and on plants. Many species of bacteria and fungi are supported by breaking down dead plant material in a process called ‘decomposition’.

Learn through playing – a photosynthesis game produced by Bioman Biology