Alleles and genotypes are important foundations of genetics. An allele is a particular form of a gene and they are passed from parents to their offspring. A genotype is the combination of two alleles, one received from each parent. The expression of a genotype is called the phenotype and the specific combination of the two alleles (the genotype) influences the physical expression (the phenotype) of the physical trait that the alleles carry information for.

An allele is a particular form of one specific gene. When Gregor Mendel completed his experiments on peas he was crossing different traits of one characteristic, such as flower color. Genetically, the variation in traits, e.g. purple flowers or white flowers, is caused by different alleles. In most cases in the plant and animal world, individuals have two alleles for each gene; one allele is inherited from their father and the second from their mother.

Depending on which alleles an individual has received will determine how their genes are expressed. For example, if two parents have blue eyes and pass the blue-eyed alleles onto their children, their children will also possess the alleles for blue eyes. Certain alleles have the ability to dominate the expression of a particular gene. For example, if a child has received a blue-eye allele from their father and a brown-eye allele from their mother, the child will have brown eyes because the brown-eye allele is dominant over the blue eye allele. In this case the brown-eye allele is known as the dominant allele and the blue-eye allele is known as the recessive allele. 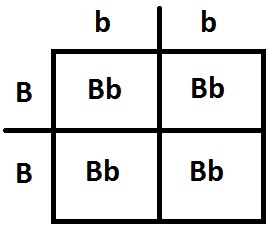 Punnet squares are used to identify the possible genotypes and phenotypes of offspring of two adults. They are a useful tool for recognizing the chance of offspring expressing certain traits. The punnet square to the right shows the potential genotypes of offspring when a homozygous dominant (BB) adult breeds with a homozygous recessive (bb) adult. In this instance all the offspring will heterozygous (Bb) for this characteristic and only the dominant trait will be expressed. In terms of genotypes and phenotypes, if the ‘BB’ genotype coded for the dominant brown eye trait and the ‘bb’ genotype coded for recessive blue eye trait, all the offspring will have the genotype ‘Bb’ and the expressed phenotype will be the dominant brown eye trait.