Genes provide information for building proteins. They don’t however directly create proteins. The production of proteins is completed through two processes: transcription and translation.

Transcription and translation take the information in DNA and use it to produce proteins. Transcription uses a strand of DNA as a template to build a molecule called RNA.

The RNA molecule is the link between DNA and the production of proteins. During translation, the RNA molecule created in the transcription process delivers information from the DNA to the protein-building machines.

These two processes are essential for life. They are found in all organisms – eukaryotic and prokaryotic. Converting genetic information into proteins has kept life in existence for billions of years.

RNA and DNA are very similar molecules. They are both nucleic acids (one of the four molecules of life), they are both built on a foundation of nucleotides and they both contain four nitrogenous bases that pair up.

There are a couple of key differences between the structure of DNA and RNA molecules. They contain different sugars. DNA has a deoxyribose sugar while RNA has a ribose sugar.

While three of their four nitrogenous bases are the same, RNA molecules the have a base called uracil (U) instead of a thymine base. During transcription, uracil replaces the position of thymine and forms complementary pairs with adenine.

Sequence of nitrogenous bases and the template strand

Through transcription, the sequence of bases of the DNA is transcribed into the reciprocal sequence of bases in a strand of RNA. Through transcription, the information of the DNA molecule is passed onto the new strand of RNA which can then carry the information to where proteins are produced. RNA molecules used for this purpose are known as messenger RNA (mRNA).

A gene is a particular segment of DNA. The sequence of bases in for a gene determines the sequence of nucleotides along an RNA molecule.

A specific set of nucleotides along the template strand of DNA indicates where the gene starts and where the RNA polymerase should attach and begin unravelling the double helix. The section of DNA or the gene that is transcribed is known as the ‘transcription unit’.

As the RNA molecule grows it is separated from the template strand. The DNA template strand reforms the bonds with its complementary DNA strand to reform a double helix.

Once the terminator sequence is transcribed, RNA polymerase detaches from the DNA template strand and releases the RNA molecule. No further modifications are required for the mRNA molecule and it is possible for translation to begin immediately. Translation can begin in bacteria while transcription is still occurring.

Modification of mRNA in eukaryotic cells

Proteins are required to release the RNA polymerase from the template DNA strand and the RNA molecule is modified to remove the extra nucleotides along with certain unwanted sections of the RNA strand. The remaining sections are spliced together and the final mRNA strand is ready for translation.

In eukaryotic cells, transcription of a DNA strand must be complete before translation can begin. The two processes are separated by the membrane of the nucleus so they cannot be performed on the same strand at the same time as they are in prokaryotic cells.

If a certain protein is required in large numbers, one gene can be transcribed by several RNA polymerase enzymes at one time. This makes it possible for a large number of proteins to be produced from multiple RNA molecules in a short time.

During translation, the information of the strand of RNA is ‘translated’ from RNA language into polypeptide language i.e. the sequence of nucleotides is translated into a sequence of amino acids.

Ribosomes are small cellular machines that control the production of proteins in cells. They are made from proteins and RNA molecules and provide a platform for mRNA molecules to couple with complimentary transfer RNA (tRNA) molecules. 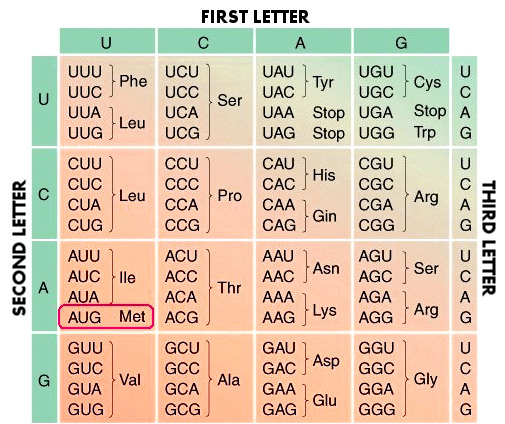 Each three-base ‘word’ is called a ‘codon’ and the series of codons holds the information for the production of the polypeptide chain. There are a total of 64 different codons and more than one codon translates into each amino acid.

A strand of mRNA obviously has multiple codons which provide the information for multiple amino acids. A tRNA molecule reads along one codon of the mRNA strand and collects the necessary amino acid from the cytoplasm.

The tRNA returns to the ribosome with the amino acid, binds to the complementary bases of the mRNA codon, and the amino acid is added to the end of polypeptide chain as the RNA molecules move through the ribosome.

The three bases of the tRNA molecule are known as an anticodon. For example, an mRNA codon with bases UGU would have a complementary tRNA with an anticodon AGA.

Ribosomes have three sites for different stages of interaction with tRNA and mRNA: the P site, A site and E site. The P site is where the ribosome holds the polypeptide chain and where the tRNA adds its amino acid to the growing chain.

Translation begins when a ribosome binds to an mRNA strand and an initiator tRNA. The initiator tRNA delivers an amino acid called ‘methionine’ directly to the P site and keeps the A site open for the second tRNA molecule to bind to.

The strand of mRNA moves through the ribosome from the A site to the P site and exits at the E site. Molecules of tRNA bind to the codons of the mRNA at the A site before moving to the P site where their amino acid is attached to the end of the growing polypeptide chain.

Termination of translation and modification of the polypeptide

Translation ends when a stop codon on the mRNA strand reaches the A site in the ribosome. The stop codon doesn’t have a complementary tRNA or anticodon.

It is common for multiple strands of mRNA to be translated simultaneously by multiple ribosomes. This greatly increases the rate of protein production. 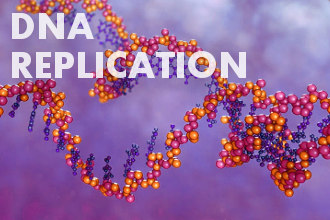 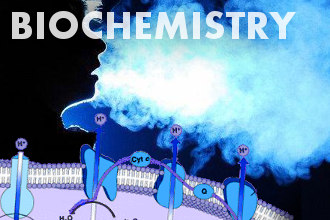