Liverworts are a group of non-vascular plants similar to mosses. They are far different to most plants we generally think about because they do not produce seeds, flowers, fruit or wood, and even lack vascular tissue. Instead of seeds, liverworts produce spores for reproduction.

The liverworts are very primitive plants and many species are only contain a single layer of cells. They differ to more advanced plants because they do not have any stomata in their tissue which are used by most plant groups for taking CO2 into their leaves for photosynthesis.

Liverworts are flattened plants that grow sprawling across soil, rocks and on other plants. Contrary to most plants, the dominant generation is the gametophyte. The sporophyte is short-lived and depends on the gametophyte to survive. 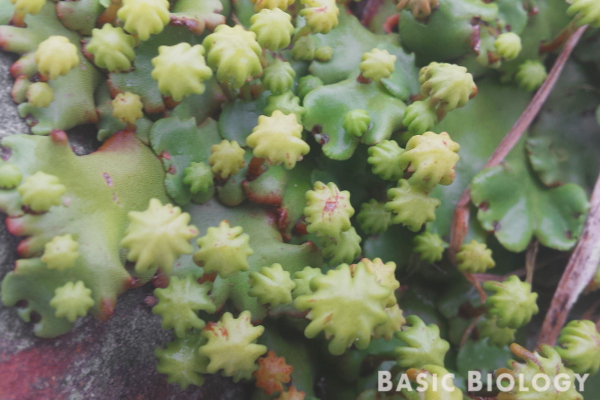 Their body plans can be separate into the upper and undersides. The upper side of the plant is green and photosynthesizes. Instead of roots, the underside of the plant has hair-like cells called rhizoids that absorb water and anchor the liverwort to the ground.

The liverworts are a relatively diverse group of plants with around 8000 species, the majority of species being leafy species.

Liverworts make up the division of plants known as Marchantiophyta. The division includes two separate class, each with two subclasses. The class Jungermanniopsida includes the subclass Jungermanniidae, which consists of roughly 5000-6000 leafy liverworts; and the second subclass Metzgeriidae.

These plants are found all around the world. Around 25 species are even found on the continent of Antarctica. They are only able to grow in moist environments because of their poor ability to store water but have an impressive ability to grow over soil, plants and rock.

Liverworts reproduce using spores rather than seeds. In order for sperm to fertilise the egg of another plant, the plants need to be covered in a thin layer of water to allow the sperm to travel between plants. Fertilised eggs grow into spores and are dispersed by wind or water.

The leafy liverworts are the most simple species but they are also the most diverse. They belong mostly to the subclass Jungermanniopsida which contains more than half of all the liverwort species.

The leafy liverworts usually consist of a stem with three rows of leaves. The leaves are very thin and transparent. Two of the rows of leaves are flattened and used for photosynthesizing. The third sit underneath the stem and is used for absorbing water.

Thalloid liverworts are a bit more complex than the leafy liverworts. Their green tissue is multiple layers thick and known as a thallus. Depending on the complexity of the thallus, thalloid liverworts can be either simple or complex.

Simple thalloid liverworts are more closely related to the leafy liverworts than to the complex thalloid liverworts. They have a thallus that is usually several layer thick except at the margins where it only has a single layer of cells. The majority of species have rhizoids on their underside to help with water absorption and anchoring the plant. Several species have a close relationship with fungi.

The complex thalloid liverworts have pores similar to stomata but they are unable to open and close. Gases enter into the air chambers via the pores. Lower sections of the thallus is used for the storage of water and nutrients.

The rhizoids of complex thalloid liverworts are also more advanced than other liverworts. They grow in various shapes that help to increase the efficiency of water absorption.